My Generation OUR TRIBUTE CARS


My Generation
Our Tribute Cars
By Rick Tavel© August 25, 2013 All Rights Reserved


For Corvette owners in the northern states the anxiety meter is beginning the annual upward move in anticipation of the ending of summer, the onset of fall and the inevitable impending winter when our cars get bundled up and put away in storage. 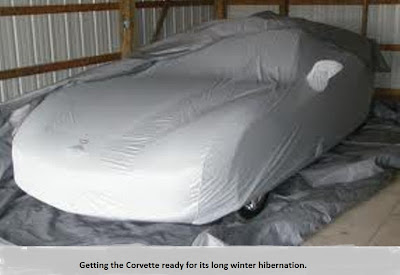 The angst in many ways reminds me of my childhood when the ten week summer vacation was drawing to an end, knowing that in a few short weeks I’d be once again held captive in a schoolroom for another nine months, similar to the way a Corvette must feel during the long winter hibernation.  Now, as then, I regret the ending of summer though for different reasons. At this point in my life, though fall may be the best season of all for road trips and rallys, the inevitable onset of the cold barren winter hits a little too close to home which usually prompts nostalgic thoughts and memories of earlier times, good times filled with countless hours of working on, talking about, and spending time behind the wheel of those special cars that have consumed so many hours throughout my life. 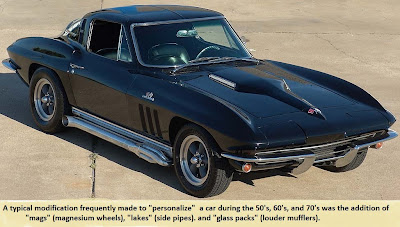 For many of us those times comprised several different cars along the way, some loved and others only tolerated, but cars suited for our specific needs at a particular stage of our life.  Few of us had the means to keep the car which first ignited a fire deep inside and began for many of us a lifetime of special appreciation and respect for the automobile.  In many cases that car was one of the first cars we owned.  Cars that many of us modified and as such became extensions or statements about ourselves, cars that often subliminally reflected our personalities and interests.  As such I refer to these as “tribute cars” because in reality they were in fact tributes to ourselves, modified for performance, for style, or both.  Some personalizations were extensive, involving extensive customizing and  modification of the engine, body or both while other changes were simple, hardly noticeable, sometimes adding no more than a pinstripe or upgraded radio and “8 Track” player.  And as much as we might have wanted to keep those special cars forever, sadly, life changes often required us to let them go.   The two most significant changes usually involved reporting for military service or getting married and starting a family.  In the former our tribute cars were sold because we could not afford to keep them or maintain them while away from home.  In the latter because we had to get a car that could accommodate a family.   In either case letting go of that car was often a heartbreaking experience but one that could not be avoided.

For those of you too young to remember, unless you were wealthy in the fifties and sixties, most families owned only one car and as such it had to be a multi-purpose utilitarian tool.  Few families could indulge themselves with both a family car and a personal car.  That began to change with dual income families but it took time and was not commonplace until the mid 1960’s.  And even then the second car was usually a practical economy car.  While we were single and unencumbered with other responsibilities somehow we had or found the time, money and parts to turn our cars into individual, personal expressions suited to us.  And typically when our life circumstances and responsibilities changed (re: got married or had children) it required us to obtain a car more suited for the purpose.  I can remember one of the reasons I had to part with my “tribute car” was the need to get a more practical car that my wife could drive.   My wife, standing only 5 feet tall and weighing less than 100 pounds, physically had trouble depressing the heavy duty clutch and driving the a high performance car with no power steering or brakes.  I still have my wife so I don’t have to tell you what happened to my car. 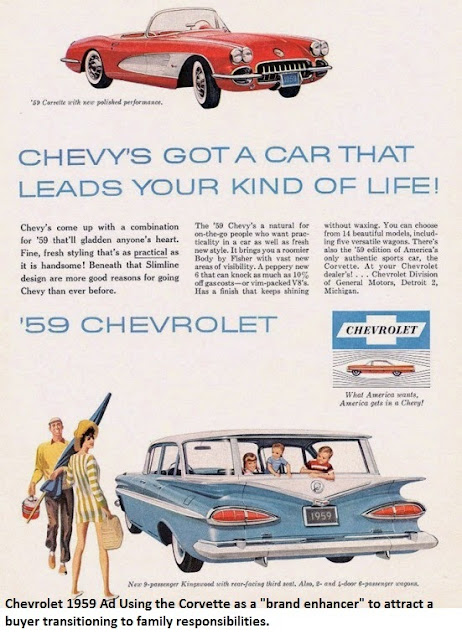 One of the benefits of being an enthusiast beginning in the last quarter of the last century was the ability for many enthusiasts to own more than one car.  Even for a family just starting out, usually “car guys” don’t have to give up their “tribute cars” unless they want to and then a few years later regret.   There is no question that the quest to reacquire our dream car has virtually grown the hot rod, 50’s and 60’s collector car market and continues to fuel the explosion of collector car auctions throughout the country.


I could afford one of the original ‘63 Corvette Grand Sports if I had a dime for every time I had either lamented or heard someone say, “I wish I had held on to my (insert car name here) that I had when I was younger.”  Because so few of us have actually been able to hold on to our “tribute cars,” I am always impressed to hear a story about someone who was able to hang on to their “tribute car,” especially if those cars were Corvettes, which are not necessarily suited to be the only car for a family of more than two people.   And recently I have had the good fortune to meet one of those Corvette owners with a great story. 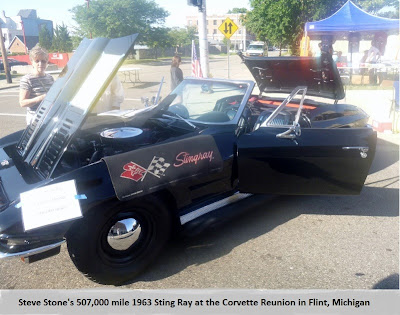 While in Flint, Michigan, at the Corvette Reunion, I met Steve Stone and got to hear,
first –hand, his incredible story.  Stone was showing his Tuxedo black, 1963 Sting Ray convertible he had just driven from his home in Madison, Wisconsin, to the Reunion, a show of almost 600 Corvettes which takes place every year in conjunction with the Back to the Bricks Car Show.  After the Reunion, Steve and his wife packed up and headed to Carlisle, Pennsylvania, where his Corvette was featured on the center stage at the largest all-Corvette event in the country, Corvettes at Carlisle.  And just what is so special about Stone’s 1963 Corvette convertible?  It’s because he is not only the original owner of the car he has owned for more than fifty years, but the amazing fact Steve has put over 500,000 miles on the car he ordered new in October of 1962.  A story perhaps more indicative of a Volvo than a Corvette.

To my knowledge Stone is not the anonymous majority stock holder in a Fortune 500 company and yet he has been able to hold on to the 1963 Corvette he originally took possession of on February 27, 1963, at the ripe old age of eighteen.  Just after the introduction of the exciting new second generation Corvette was unveiled, Steve knew he had to own one of the revolutionary new cars; the only obstacle was figuring out how to pay over $4,000 for it.  So he sold his 1956 Chevrolet coupe and asked his father to co-sign a loan for the purchase.  His father agreed, so in October of 1962, Steve visited his local dealership and ordered his Corvette in Tuxedo Black with the 327 cubic inch, 340 HP engine and four speed transmission.  In addition he added a signal seeking radio, positraction and the optional hard top for winter driving.  The car had 4:11 gears, white wall tires, and no power steering or brakes. After four agonizing months of waiting, the car of Steve’s dreams was delivered to the dealership. 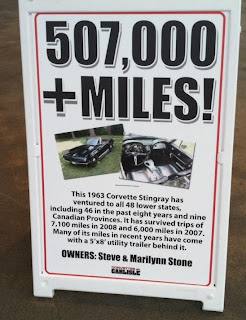 The first few years of ownership the car was his only means of transportation and Stone put over 30K miles a year on the car, driving it year round.  During the early years the hardtop option got a lot of use especially in the snowy winter, but until recently the hardtop had not been on the car for over thirty years.  Then in 1965 Steve was drafted.  He was convinced he’d be sent to Viet Nam, so he reluctantly put the Corvette up for sale, not wanting to leave his parents stuck with the loan if anything happened to him.  But the planets must have been in alignment because the car never sold and Steve did not go to Viet Nam as he expected.


When he returned from the service, Steve began making some modifications to his Corvette, changes that were more suited to his taste at the time, he added side exhausts and disk brakes.  And over the years he has also added dual MSD ignition systems to insure he does not get stranded on one of his wilderness treks.  Though Steve has other cars now, he still drives the Corvette extensively.  He has driven the car to all of the lower forty eight states and the nine Canadian provinces.  He and his wife, who has learned to pack light, travel extensively in the sports car, sometimes towing a small trailer Steve made for the car.  The trailer is particularly helpful when they take their annual trip to the Boundary Waters and take along their twenty-two foot canoe.

During the car’s lifetime, it has had the engine rebuilt or replaced four times, the front end clip replaced a few times due to accidents, the interior replaced twice and the frame restored once.  As you would expect, Steve has a special attachment to the car and plans on leaving the car to his fourth son who he knows will continue to take care of and drive the car Steve has nutured for a half century.  During our conversation he summed up his feelings, “I can’t see myself driving any other Corvette, not even if I was given a new C7.”


Needless to say, it is amazing that Stone was able to hold on to his Corvette despite the challenges and demands of family life.  The car has offered him not only thousands of hours of enjoyment behind the wheel but a lifetime of memories as well.  If there was ever a testament to the fact that Corvettes are made to be driven, Steve Stone and his car are it.   So as the fall season approaches don’t let it inspire only memories about times past.  There is still time before your Corvette goes into hibernation to create some new memories cruising the back roads immersed in vivid fall colors and crisp autumn weather.  There is still time to get your motors running, head out on the highway, look for adventure and create your own stories and memories this fall behind the wheel of your Corvette. 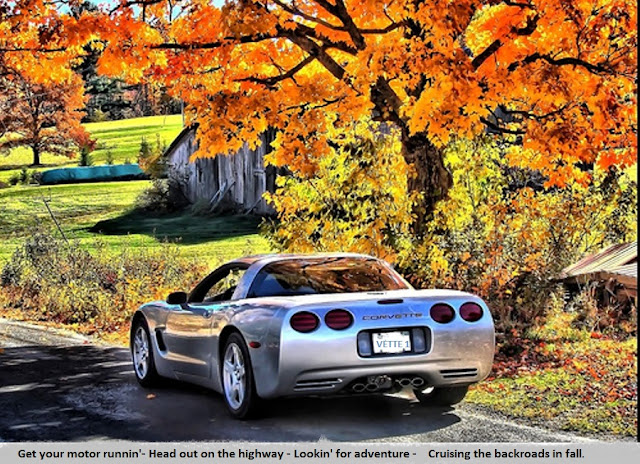 Posted by theRevenant at 2:07 PM