The Corvette hobby has millions of enthusiasts but few as recognizable and well known as Terry Michaelis, president and co-owner of Pro Team Corvette in Napoleon, Ohio, and Corvette collector who has owned some of the most important Corvettes ever produced.  In addition to amassing one of the finest and largest Corvette collections in the country, he has notably impacted both the Corvette hobby and enthusiasts over the past forty years that he has been consumed with America’s sports car.  Chances are if you love Corvettes and are a student of Corvette history then you have been impacted in some way by Michaelis’ involvement in the hobby, whether just enjoying one of his historic Corvettes that are frequently invited to be shown in shows across the country or by the years of work Michaelis has devoted to archiving and sharing important details about the car and its history.  That is why Terry Michaelis has been selected by the Bloomington Gold selection committee to be inducted into the Great Hall during the celebrated Bloomington Gold three day event held annually in Champaign, Illinois, June 27th through the 29th.  Michaelis will become one of the 50 people or organizations who have most impacted and influenced the Corvette hobby since the car’s inception and will be one of only ten people and organizations to be inducted during this, the final year for inductees.


This year marks the end of a five year program honoring ten individuals or organizations and ten Corvettes as the most important in the history of the car, culminating over five years with  the 50 most significant and influential people or organizations and the 50 most influential and historic Corvettes, throughout the Corvette’s legendary and storied 62 year existence.  Michaelis will join nine other 2014 inductees such as Larry Shinoda, Vince Piggins, Karl Ludvigsen, Ronnie Kaplan, Irwin Kroiz, Bob Gold, Al Grenning, and organizations the National Corvette Museum and Cypress Gardens  as well as noted past inductees such as Zora Arkus-Duntov, Bill Mitchell, Jim Perkins, Reeves Callaway, Mike Yager and Kevin Mackay to name just a few.


Michaelis has bought and sold over 10,000 Corvettes since his first purchase and sale back in 1971 and is a leading authority on the Corvette, its design, parts, options and engineering.  He has written several scholarly articles on the Corvette    (see TMichaelis Corvette Perspective  http://www.tmichaelis.com/tag/classic-car-community/ ) and has owned some of the rarest and most sought-after Corvettes ever produced.  In addition to traditional methods of amassing an important Corvette collection, he has also miraculously found and restored several “barn finds” which have turned out to be historically significant.  But the word “miraculously” is misnomer because it’s not miracles but rather hard work that has paid off for his collection and business.  Michaelis puts untold hours researching specific Corvettes before and after he acquires them and then usually subjects his acquisition to a detailed restoration often costing hundreds of thousands of dollars.


Over the years Terry Michaelis’ collection has been a virtual dream team of Corvettes. While many collectors salivate like a Pavlovian dog at the thought of one day finding and restoring any forgotten Corvette tucked away in a barn, a few years ago, within months of each other, Michaelis discovered two separate “barn find” Corvettes.  But these were not ordinary forty-five year old barn finds, they were 1963 Z06’s both had racing history.  After acquiring the cars and thoroughly documenting their provenance he restored the important cars and then sold them. 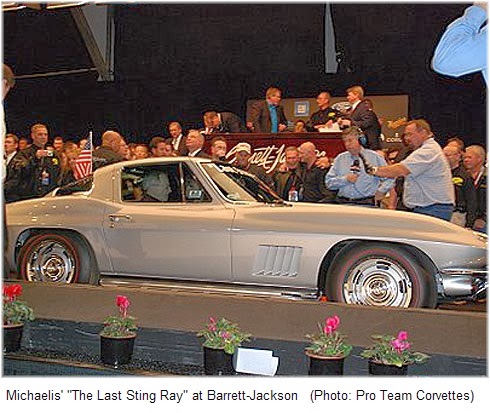 Enthusiasts may have also seen the six part TV documentary, “The Last Sting Ray,” about the restoration and history of another one of Michaelis’ finds, the documented last 1967 Sting Ray ever produced.   After a very costly, world-class restoration it sold on TV at Barrett-Jackson’s auction for $660K in 2007.  Those who got to see the car cross the block also got to see Terry kick off the sale of the silver coupe and also observe one of qualities that has made him so successful over four decades; like P.T.Barnum, he is known for “over the top” marketing.


(Watch it on You Tube  https://www.youtube.com/watch?v=hzaDkUf3lfg )


And he is relentless in his continual quest to find other Corvettes to add to his stable. A stable that has at one time included several of the Great Hall's fifty most important Corvettes. 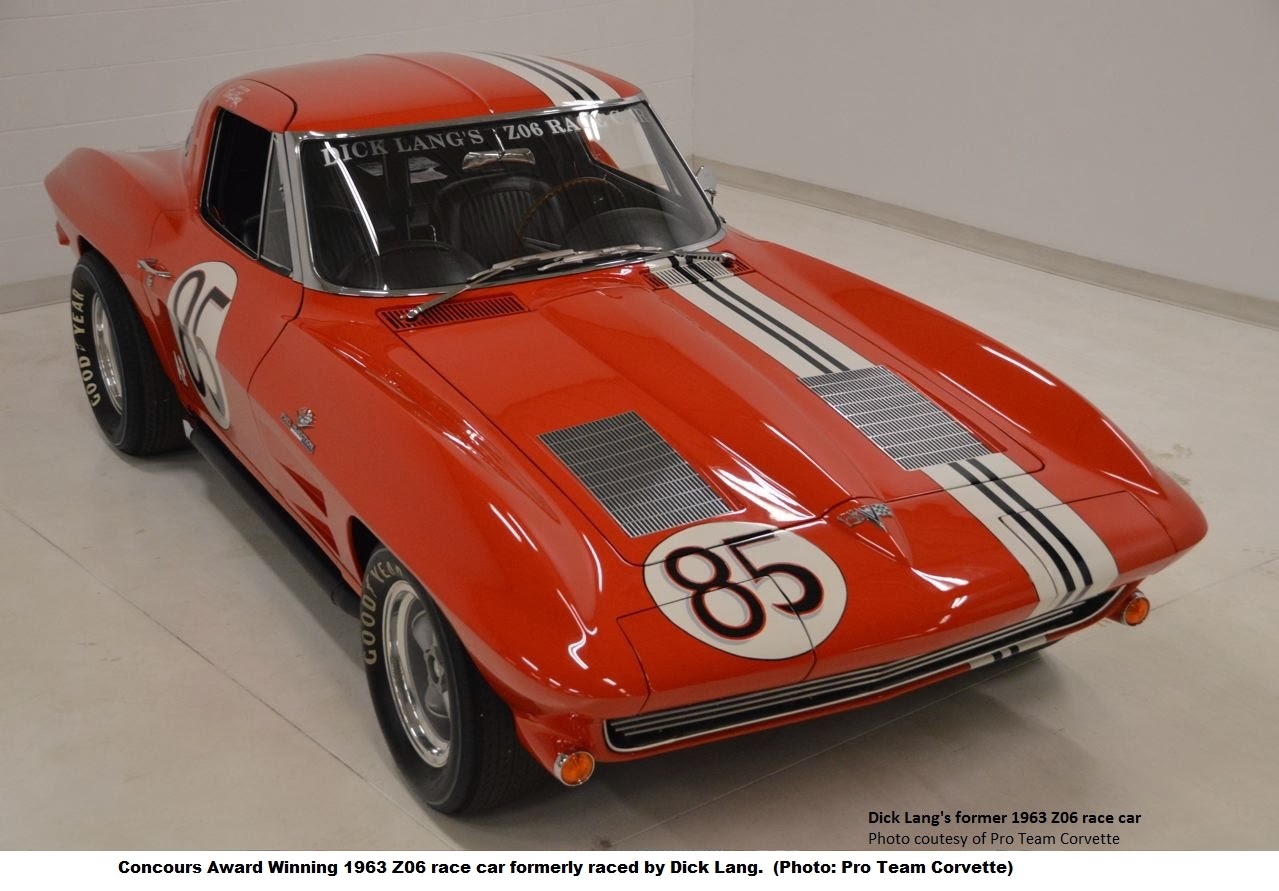 Most recently he has shown and taken home several ribbons and awards at concours and judged Corvette events throughout the country with his 1963 Z06 “tanker” formerly raced by Dick Lang.  And when he puts one of his Corvettes up for sale, the buyer must keep in mind that he will be bartering with the consummate Corvette collector and expert who knows more than the buyer does about the Corvette and the Corvette collector market.  His Lang Z06 crossed the block at Mecum’s Kissimmee sale but the Corvette failed to meet Terry’s reserve even though it was bid to a healthy $900K.  Simply based on the restoration, the history, the significance and the awards, the car was worth more and Terry knew it and wasn’t going to be “low-balled” with a mere $900K bid!  And he must have been right because the Corvette subsequently has sold.
Over the past several years several Corvette collectors watch Michaelis to see what he is buying, like stock investors watch Warren Buffett, realizing that he is usually ahead of the market.  Terry was avidly seeking out the iconic and recently record setting L88’s before they were selling for $3+M.  And savvy “Michaelis watching” collectors know that Pro team’s president is reeling in some big catches, especially when it comes to third generation L88’s.   In January 2013 he snatched one of the best buys at Barrett-Jackson’s Scottsdale auction, paying less than $300K for a third generation 1969 L88 and then in September brought the car back to auction and this time at Mecum’s Dallas event the car was bid to over $400K but did not meet Terry’s reserve.


Winning awards is not unusual for one of Michaelis’  Corvettes which always seem to be featured at concours events throughout the country.  The awards, though a satisfying testament to the quality and accuracy of the restoration, ultimately add value to the car when it if offered for sale.  One of his cars, a first generation 1953 Corvette, which he refers to as his “Beach Car,”  is the oldest known competition Corvette, one of the three first generation Corvettes to run at the 1955 Daytona Beach Time Trials, and has been invited to the Amelia Island Concours d’Elegance.  This is one of three Corvettes that were prepped for the NASCAR time trials where the Corvettes ultimately proved to be a worthy competitive sports car and played an important part in the survival of the Corvette brand.


But as busy as he is with his Corvette business and collection Terry is never too busy to take some time out of his schedule to talk with and help Corvette enthusiasts and collectors and to share his vast knowledge on Corvettes.  Whether it is a question on a correct restoration part or to tell the story and history of a car Terry takes the time to help a new Corvette enthusiast just starting out in the hobby just as he would for one of his repeat customers.   And he recognizes the role those Corvette friends and acquaintances have played throughout his career.  When asked about his induction into the Great Hall he says, “As flattered as I am to accept entry into the Great Hall, I don’t enter alone. I take along the decades of indelible friendships and memories.”

Posted by theRevenant at 10:16 AM No comments: