Dana Mecum’s favorite car has to be the Chevrolet Corvette, especially if solely based on the number of outstanding high dollar cars that were hammered down during the last four days of his third Dallas auction.  It was clearly evident that Corvettes carried the four-day auction and were the car of choice for collectors where a new record price was paid for a Corvette ($3.2M, a 1967 L88, fully documented former NHRA record holder and the only ’67 L88 to retain its original body panels -lot S123- (See story - http://www.corvetteblogger.com/2013/09/07/video-1967-l88-corvette-convertible-sells-for-record-3-2-million-at-mecum-dallas/#more-16267).  Of the 172 Corvettes that crossed the block 106 were sold, a 61% sell through rate, for a combined hammer price of $9.106M.  Though some buyers were able to grab some excellent bargains during the first two days of the sale, the last two days saw spirited bidding and prices well above average.  Almost twenty Corvettes were hammered down above $100K.   Most restored second generation cars were selling between $100K to $150K and if the car had any rare options it was selling close to or above $200K.

Most of the Corvettes that crossed the block on Friday and Saturday were of exceptional quality and subsequently carried high reserves.  Though the majority of sellers’ expectations were exceeded, over sixty cars were not hammered and went to “the bid goes on” area where buyers and sellers often can come to a compromised agreement on price.  One of the premier cars of the auction, the last documented L88 produced (lot S130.1), a 1969 Fathom Green C3, failed to meet reserve even though the car had been bid to $430K and had been purchased earlier

Based on the results of Mecum’s Dallas auction, owners of first and second generation Corvettes should be ecstatic based on the continued upward spiral in prices on those cars.


High quality, original, numbers matching, restored first and second generation Corvettes are bringing well above $100K and several with rare options are getting $200K or more in today’s market with no evidence of those prices falling in the near future.  Of the Dallas auction’s top ten sellers four were Corvettes, all bringing in excess of $200K.


Dana Mecum said in an interview the Dallas results were great and that he actually needs a larger facility, with more space to park consigned cars, to help him meet the demand for an expanded auction in the future.  I’m sure based on the results of this year’s event he will be looking for ways to make that a reality and I am also sure that based on the quality level of the cars at this year’s event, auto enthusiasts and especially Corvette enthusiasts, would welcome that expansion.
A Few High Dollar Cars That Failed to Meet Reserve


Here is the article that I wrote before the auction with more details on the cars.
Mecum Offers Museum Quality Corvettes in Dallas
By Rick Tavel© All rights reserved

Right on the heels of his successful Monterey event which generated over $31M in sales, Dana Mecum is headed to the Lone Star state to host another auction extravaganza, September 4th through the 7th.  This will be Mecum’s third year for his annual Dallas event held at the convention center and will be loaded with over 1400 collector cars featuring over a hundred Corvettes including several examples of the six  generations.  Mecum is known world-wide for the vast quantity and high quality Corvettes he miraculously uncovers for each auction and the Dallas auction is no exception. This year Mecum will be selling Buddy Herin’s outstanding collection of extraordinary Corvettes.  If you appreciate rare and historically important Corvettes then it would be worth the trip to get to inspect some of finest Corvettes being offered at auction this year.   Six of those Corvettes could be “headliners” in any auction event but all six will cross the block Saturday afternoon in Dallas.
The 1967 L88 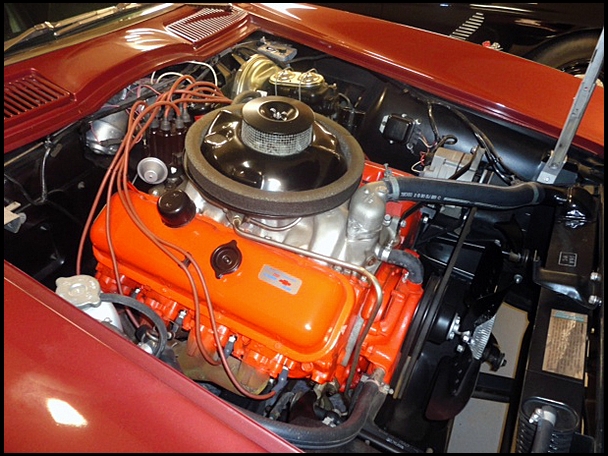 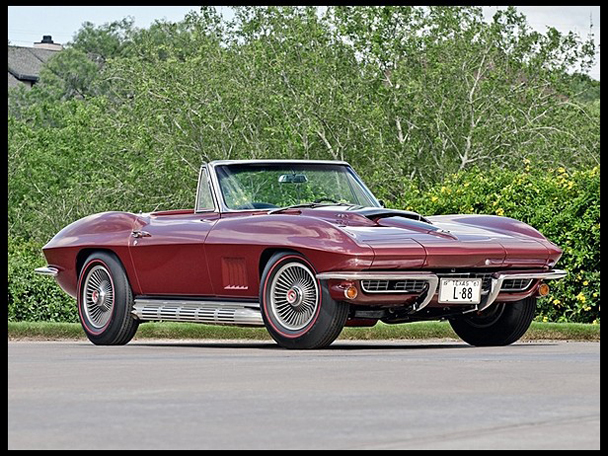 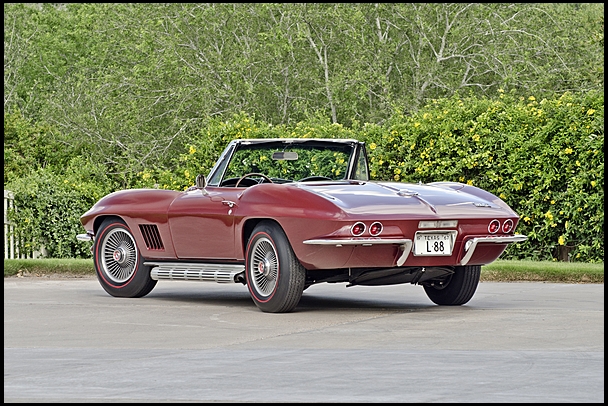 It would be easy to overlook some of the other significant Corvettes being offered in Mecum’s Texas round-up due to the heavily promoted feature star of the auction, a Chevrolet Corvette convertible, Lot 123, one of twenty L88 Corvettes produced in 1967.  A part of Buddy Herin’s Collection, the Marlboro Maroon Corvette is equipped with the L88 427/430 HP engine, M22 “Rock Crusher” 4-speed manual transmission, 4.11 rear end, heavy duty power brakes, factory side exhaust and F41 special suspension.  It is the only 1967 L88 believed to retain its original body panels and has been restored by Nabers Brothers in Houston, Texas. Mecum estimates the award winning  Corvette will sell for prices approaching $3M.  Yeah that’s a 3 with six zeros following it. Corvettes of this rarity and quality cast a long shadow so it is easy to see how one might overlook some of the other cars being auctioned. Don't be surprised if this Corvette doesn't get hammered down for a new world's record price at over $3M

But in typical Mecum style that is only one of several important Corvettes that will find new homes during the Dallas auction.  If you love C2’s and high horsepower then you’ll want to check out Lot S188, a 1966 Corvette coupe, one of only 66 “big tank” Corvettes produced that year.  Along with most high value cars, it will also cross the block Saturday afternoon.  The 427 cubic inch, 450 HP L72 car has only 7200 miles and has also undergone a Nabers Brothers restoration.  The Nassau Blue exterior with black interior car has received the NCRS Top flight award.

Second generation Z06’s are highly prized, and Lot S125 is a beautiful Riverside Red/red interior example and one of the 199 Z06’s produced before General Motors officially withdrew from racing. The Z06 option was only offered on the 1963 model and was a chance to package several competition options and components together. The only choice of engine in the Z06 was 327/360 HP small block with Rochester fuel injection, the famous Duntov-spec solid lifter cam and forged rotating assembly, backed by a Muncie M20 4-speed and posi-traction. In addition the Z06 came with stiffer front and rear springs, heavy duty stabilizer bar and shock absorbers; special large drum brakes with vented backing plates, finned brake drums, internal cooling fans, a dual-circuit master cylinder and finned aluminum knock-off wheels.   In addition to the Z06 options this exceptional example is also optioned with power windows, power brakes, and radio delete. Like many other Corvettes from the Herin collection, Naber Brothers restored the car in 1996  and it went on to capture Bloomington Gold Certification that same year with a score of 98.6, and then in 1999 it earned NCRS Regional Top Flight status.

Or if your taste runs to first generation cars, 17 are on the docket for Dallas.  If historically important first gens are important then how about a 1957 “airbox” Corvette with a race history, originally owned and raced by Sports Car Graphic’s Kenneth Edwards.  Mecum’s is offering Lot 121, one of only 43 “airbox” Corvettes produced in 1957 which offered a new fuel injection system helping the 283 Cubic inch engine attain the mythical "one-horsepower-per-cubic-inch" threshold for the first time.   This option, RPO 579E, included the 283 CI V-8 with Rochester “Ram Jet” fuel injection, cold air induction, Borg Warner 4-speed manual transmission and a column-


mounted 8,000 RPM tachometer. Only 17 or 18 of the original 43 cars ordered with that option exist today. This historically significant Corvette was ordered in Onyx Black with red interior and in addition to RPO 579E, included a heavy duty racing suspension, posi-traction, Wonderbar radio, power top, and painted steel wheels with “dog dish” hubcaps.  About the only option excluded was power windows.   Edwards raced the car at both the drag strip and road courses until selling it in 1962.    Typical of many of the Buddy Herin Corvettes being auctioned, Nabers Brothers did a complete restoration on this award winning car and it has collected several prestigious awards.


Another first generation car, Lot 126, and another part of the Buddy Herin collection, is a 1962 Tuxedo Black/black interior “big brake” C1 that has only 4,901 miles since it rolled off the assembly line.  It is one of only 246 Corvettes produced in 1962 with RPO 687, which encompassed special front and rear shocks, front brake deflector/air scoops, rear brake air scoops, finned drums with internal cooling fans and quick steering adapter, all developed and proven on the track.  It has the most powerful engine available in 1962, the 327/360 HP small block V-8 with Rochester fuel injection and 4–speed manual transmission, which was required with the “big brake” option.  In addition the “fuelie” has a Tuxedo Black auxiliary hard top, Wonderbar radio and painted steel wheels with dog dish hub caps. It was restored to its original triple Black color combination by Naber Brothers, who preserved the original interior with the exception of new carpet and dash pad. It was subsequently awarded Bloomington Gold Certification in 1994, and in 1996 it was awarded NCRS National Top Flight honors and the highly coveted NCRS Duntov Mark of Excellence Award, a highly coveted honor that requires that the car pass a demanding judging regime and rigorous performance testing without a single failure. This exceptional collector Corvette is well documented with the dealer invoice, owner protection plan and a file of supporting paperwork


Let’s not forget the third generation Corvettes. There are over thirty C3’s being offered with the superstar of the group being the “last documented L88” ever produced. This Fathom Green/Saddle interior car was built the final day of L88 production, Thursday, December 4, 1969, and is the last of the 116 L88’s produced.  It was the beneficiary of a body-off restoration by Thorpe's Corvettes, Thorpe is a past Bloomington L-88 judge. This important C3 is equipped with the L-88 special purpose 427/430hp engine, leather interior, stainless steel brakes, stainless exhaust, transistor ignition system, F41 special purpose suspension,  posi-traction, power brakes, J50/J56 special brake system and M22 Rock Crusher 4-speed transmission.  It is documented with build sheet, tank sticker, owner history, NCRS certificate, judging sheets, and title search back to the original owner.  Another Saturday car it is lot number S130. The car was sold earlier this year for over $275K.

For Corvette lovers this may very well turn out to be one of, if not, the best auction of significant Corvettes in the country this year, not only in the quality level but the historical significance of many of the cars, especially those from Herin’s collection.  Just make sure that if you’re planning on taking one of them home you might want to check with your banker and broker because they say everything in Texas is bigger and I am sure that will apply to the prices of these special cars.

Posted by theRevenant at 3:09 PM