I wanted to bring you the first photos of the outstanding Corvette events taking place in and around Detroit and Flint, Michigan, this week.  Along with the world famous Woodward Dream Cruise which unofficially has already ,Corvettes on Woodward, Back to the Bricks, and the Corvette Reunion will all take place over the next four days.


Though officially the Woodward Dream Cruise does not start until Saturday, hot cars of all types have been cruising Woodward each evening since last Saturday to continually growing crowds of spectators.  Even Tuesday night’s temperatures which plummeted into the 50’s could not keep the crowds from lining the eight lane highway to watch the cars cruise by.  Wednesday morning Corvettes on Woodward kicked off with a tour of General Motors’ Heritage Center at 10AM then in the afternoon hundreds of Corvettes converged on the Bloomfield Hills Radisson Hotel to get ready for the 7 PM all-Corvette five mile parade down Woodward Avenue.
Larry Courtney, organizer of the event, stages this event each year to benefit the Open Hands Food Pantry, which relies heavily on the generosity of Corvette owners participating in the event. It has grown into a premier Corvette gathering over the last few years attracting hundreds of Corvettes from as far away as Sweden.

The large parking lot behind the Radisson Hotel in Bloomfield Hills began filling up shortly after noon on Wednesday with Corvettes of all generations.  Only one C7 made it to the event due to a GM edict from the legal department that prohibited any manufacturer plated car (which most of the C7 in and around Detroit are) from participating in any car show or cruise.  The "premise" is that these plates are issued for the purpose of testing new cars and as such are not to be used in cruises.  It's disappointing that GM is missing such a great opportunity to show off their newest new cars by letting the legal eagles get in the way of selling and promoting car sales!  However during the cruise I did spot three C7s without the manufacturer plates, a Lime Rock Green, a Velocity Yellow, and an Arctic White.

There were several interesting Corvettes from perfectly restored NCRS Bloomington Gold award winners, classic survivors, custom and restomodded cars to cars with interesting stories.  One of the most interesting activities of any Corvette show is to see how owners have modified their cars to suit their individual tastes and preferences.  It has long been my theory that one of the things that has made Harley Davidson so successful is the huge array of custom accessories that can be added to the bike.  Virtually no two Harley's are the same after a year or two because the owner has personalized it.   And many ways it's the
same with Corvettes and their owners.  From a small accessory to wheels, exhausts, air intakes to a complete customization the owners are usually more than willing to tell you about their cars.   One of those was the C2 tribute to Jan and Dean's Deadman's Curve record.  Jan and Dean autographed the glove compartment of the car whose interior featured a chrome skull shift knob with red ruby eyes.
At 5:30 PM I counted 480 cars in the lot and in the hour and a half left until start,
the event ultimately drew more than 500 Corvettes.  At 7 PM all 500+  Corvettes began the fifteen mile parade down Woodward Avenue two abreast.  Because the parade was not escorted through the stop lights the line of Corvettes got separated at spots due to the heavy cruising traffic on the eight lane highway.  The parade was over five miles long and literally crawled its way to the Open Hands Food Bank at 11 Mile and Woodward.   Woodward was so crowded, between 15 Mile Road and 12 Mile Roads traffic virtually inched along in front of thousands of spectators lining the historic avenue that was once the epicenter of street racing in the 1950’s and 60’s.   The audience lining the side of Woodward taunted the drivers to do burnouts which are illegal and subject to being issued a ticket, but several cruisers accommodated them with revving engines.  The aroma of racing gas permeated the area much to the pleasure of most gearheads.   All things considered Larry Courtney’s event was a good time and the food and cash donations raised for the food bank will feed thousands in upcoming months.﻿

So if you can’t be there to join in the festivities at least you can enjoy the pictures.  Stay tuned for updates on the Woodward Dream Cruise, the Back to the Bricks Event and the Corvette Reunion, all taking place the next few days.  The Revenant will be covering them all for my readers and to borrow one of Chevrolet’s old advertising themes from 1969, “Putting You First, Keeps Us First.” 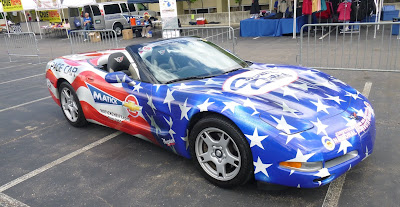 Larry Courtney's car sponsored by Matick Chevrolet and Corvette Central has traveled the United States extensively participating in Corvette events.  The car dressed in the American flag is a familiar site in and around Michigan.  Courtney is the Michigan state chairman for the National Corvette Museum's 2014 National Corvette Caravan.  Larry and his wife Verna are outstanding ambassadors for the Corvette hobby and have been responsible for raising thousands of dollars for various charities.
﻿﻿﻿﻿﻿ 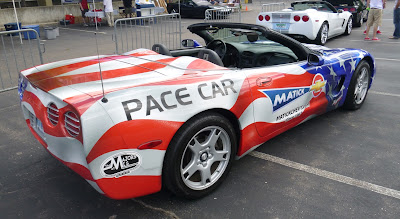 Last Saturday Larry was instrumental in helping put on the America's Corvette Club all Corvette Show and in June he organized the Corvette event at the
GM Renaissance Center in downtown Detroit. 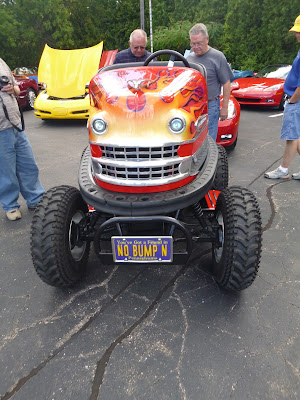 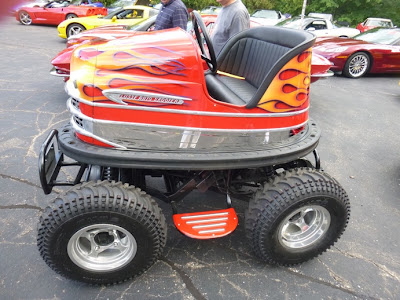 Don't ask me what it is but it is the only non Corvette roaming around the paddock area.  It drew a lot of attention being such a strange vehicle among the classic Corvettes.  One guy said it was the support vehicle for his Corvette!!!  Kind of looks like a carnival ride on steroids with a kick butt engine! 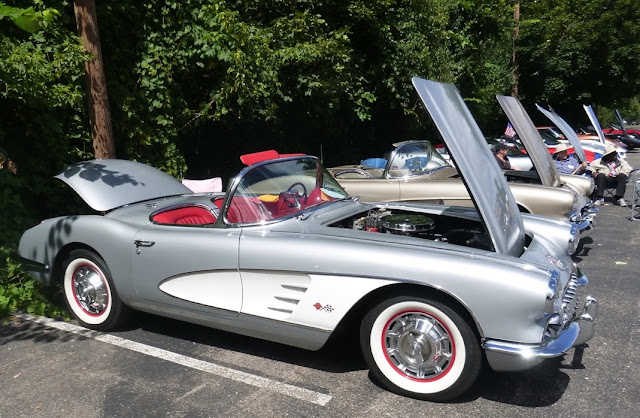 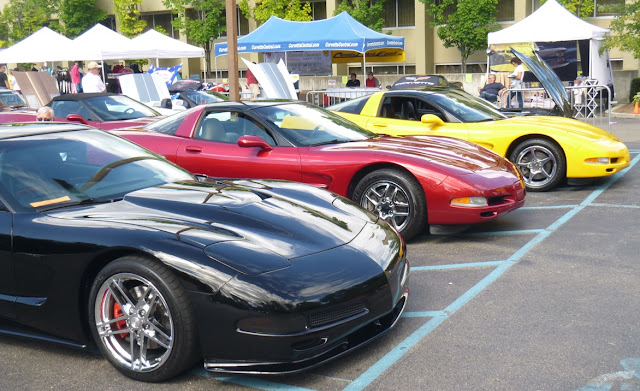 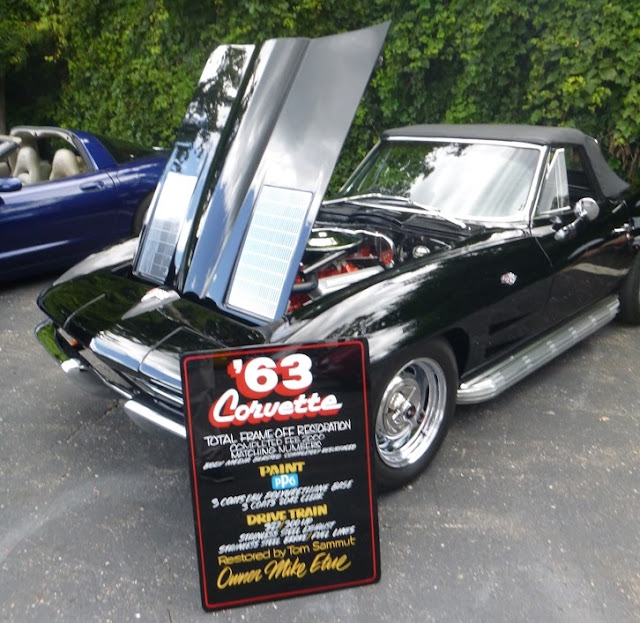 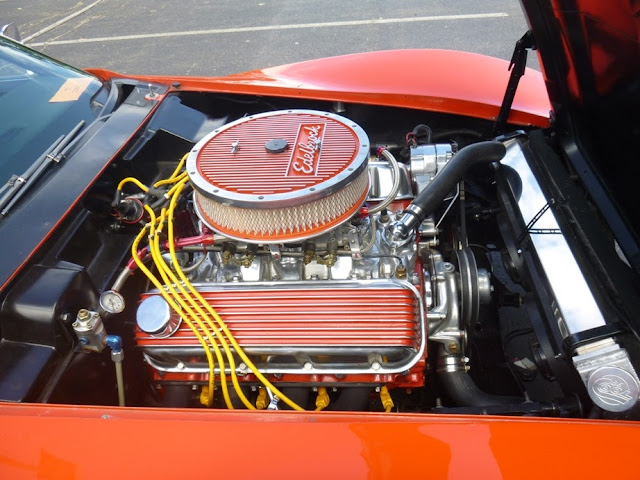 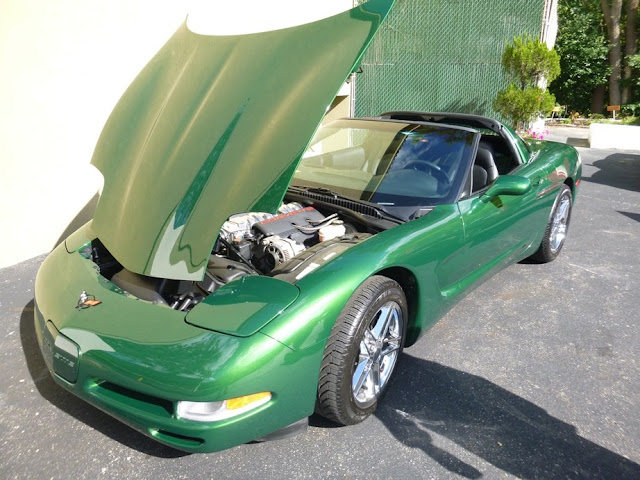