Corvette Reunion & Corvettes on Woodward – A Week of All Things Corvette


One of the largest automotive events in the country is getting ready to kick off with almost a full week of pre events ranging from daily cruises and tours, a night at a drive-in movie reminiscent of the 50’s, to evenings of fun and partying with DJs and live music.  Then on Saturday, August 17th, over 600,000 car lovers will converge on one of the largest car shows in the country where thousands of cars will be on display in Michigan’s “vehicle city”.  You may not realize we are not talking about Detroit and the world famous Woodward Dream Cruise,  though that event runs during the same period.  We are talking about the Back to the Bricks/Corvette Reunion in Flint, Michigan.   With the city’s approval most of downtown Flint’s streets are closed to normal automobile traffic to accommodate the thousands of cars on display and the event attendees.
This is the Corvette Reunion’s 4th year, which officially kicks off on Friday evening August 16, with a meet and greet and opening party at the Brick Street Bar & Grill.  The Reunion takes place simultaneously with the Back to the Bricks event and is technically an “event within an event”, utilizing Saturday’s Back to the Bricks car show as a platform for the Reunion’s own show, which will draw close to a thousand Corvettes from all over the country.  The event is so large that the National Corvette Museum located in Bowling Green, Kentucky, will also be on hand at the show.  Though the Corvette Reunion is technically its own event, it has become one of the largest and favorite parts of the Back to the Bricks show taking up several entire streets in the “Vehicle City’s” downtown. 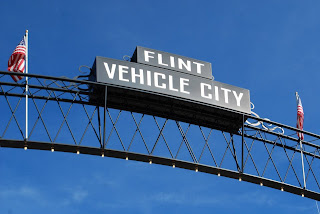 The Corvette Reunion has grown exponentially the last four years and has required significantly more street space each year from the Back to the Bricks committee which controls the allocation of street space for clubs and groups that wish to park together during the event.  There is no charge to display your car during Saturday’s Back to the Bricks show.   Individual show cars can be parked on a “first come” basis on any street not assigned to a car club or large group and as expected entrants vie for the best available spot, often lining up late Friday night to be among the first cars allowed access early Saturday morning.  However, if a large group or club wish to park together they must contact the Back to the Bricks committee in advance to be assigned sufficient street space, usually a portion of one of the side streets.  To be allocated space the club must guarantee enough members cars show up to fill the assigned spots.  This requires considerable advance planning  by the Back to the Bricks committee and also guarantees an adequate portion of a street can be held for the club and at the same time insures prime spots are available for the individual who wants to show their car.


Club membership is not a requirement to participate in the Corvette Reunion and is open to all Corvette owners free of charge.  To display your car all that is necessary is for you to show up and use the proper designated “Corvette only” entrance located at 5th Avenue and Martin Luther King Boulevard. The gate opens at 6 AM.   However, this year to help offset the rising costs, which in the past have been covered by Flint’s four Corvette clubs and are now approaching $10,000 for the events, awards and trophies, those Corvette owners who want their cars to be eligible for competitive judging and awards there will be charged a $20 fee. However, it’s totally free to be a part of the Reunion and enjoy showing off your car with almost a thousand other Corvette lovers.
The Corvette Reunion has become the largest Corvette event in the state over the last four years under the leadership of Gary Drago, owner of Drago Corvettes, a well respected Corvette service and accessory business and Anthony Bowling, president of Trend Settas Corvette Club.  As early as 2006 Drago, not affiliated with any one club at the time and owner of a business that serviced all of the clubs, made an effort to get the Flint clubs to band together for the Back to the Bricks event and show all Corvettes, regardless of club affiliation, as one group.  Initially his proposal met with skepticism and resistance, mainly a result of club “politics” and the fear of compromising an individual club’s identity and also a result of the space he had been allocated from the “Bricks” committee was in some club’s opinion far from “prime”.  But each year Gary gained more and more support from members of the various Flint clubs who could see the benefits of his proposal.  Then Anthony Bowling, President of Trend Settas Corvette Club, supported the idea of having all Corvettes parked together.  Bowling’s plan was to create a Corvette event within the “Back to the Bricks” show and call it “Bring the Vettes back home,” in honor of the birthplace of the Corvette.  Bowling’s idea apparently resonated with the other Corvette clubs and appeared to be the spark necessary to support Drago’s idea of parking together band together for the event and fours ago the Corvette Reunion was officially organized. Drago became the Reunion’s chairperson with members from all four Flint clubs on the Reunion committee.


The Back to the Bricks organizers were astounded when over two hundred Corvettes showed up the first time most of the clubs parked together in 2009.  The turnout was so large it required Gary and Anthony to negotiate for more street space for 2010 which officially became known as the Corvette Reunion.  Because the first event was so successful, Drago and Bowling not only requested more space for the following year but they asked for “better” space as well.  The first year of the official Corvette Reunion  saw over 300 Corvettes at the event and by 2012 the number rose to over 500 Corvettes.


Drago predicts that 2013 will top 700 Corvettes and if the weather holds may be light, especially if Larry Courtney and a large number from his Corvettes on Woodward event decide to join in.  Seventy miles south of Flint in the suburbs of Detroit, like last year Larry will be organizing Corvettes on Woodward which attracts five hundred Corvettes and is one of the most important and exciting “all Corvette” events in the country.  Larry Courtney is a well known and respected Corvette enthusiast and organizer of several Corvette shows and events.  He is the Michigan captain of the NCM 2014 National Corvette Caravan.  Corvettes on Woodward benefits the Open Hands Food Pantry and kicks off on Wednesday, August 14, with a tour of GM’s Heritage Center followed by a meet and greet at the Radisson Hotel in Bloomfield Hills.  Then at 7 PM over 500 Corvettes from as far away as Sweden will exit the hotel parking lot and begin their almost ten mile caravan down legendary Woodward Avenue to the Open Hands Food Bank.  The cost to join in is to own a Corvette and donate some food or money to the food bank.  The next day you can tour the exciting Lingenfelter Collection in Brighton, Michigan, and then in the evening get together at Hooters in Troy, Michigan.  Friday is filled with a tour of Katech Performance in Clinton, Michigan and requires advance reservations.


That leaves the 500 Corvettes free on Saturday to take part in the Woodward Dream Cruise or head north and be a part of the Corvette Reunion.  If you want to be surrounded by other Corvettes there really is no choice but to drive to Flint.  And if you’re set on the Dream Cruise you can do the Corvette Reunion early and be back on Woodward in plenty of time to be a part of the Dream Cruise Saturday evening.  You can get all the details on Corvettes on Woodward right here on the Corvette Forum in the “Great Lakes” Regional forum. http://forums.corvetteforum.com/great-lakes/3308134-corvettes-on-woodward-update.html


So if you are into Corvettes there is only one place to be the third week in August to surround yourself with other Corvettes and Corvette owners.  Start in Bloomfield, Michigan with Corvettes on Woodward and the exciting events and activities Larry Courtney has planned and then Friday afternoon set your sights on Flint so you are there to be a part of the Corvette Reunion.     http://corvettereunionatbacktothebricks.com/