Legendary Corvette “Rebel” To Cross Block at Barrett-Jackson in Scottsdale

Throughout the sixty years of Corvette history there are relatively few cars with the background, impressive credentials and significance of the renowned #57 1969 L88 racecar known as “Rebel”.  The Rebel was so famous and celebrated that Revell® offered a replica model kit of the car in 1:24 scale.  On Saturday afternoon, January 18, 2014, Barrett-Jackson will auction the legendary racecar during their annual Scottsdale auction extravaganza.


Originally painted Daytona Yellow the L88 was one of only 116 produced for 1969 and was delivered in early January to Orlando Costanzo, SCCA racer and sales manager for Ferman Chevrolet in Tampa, Florida.  The car was one of only four prototype lightweight L88’s that had new open-chamber heads and released early by GM engineers to selected racers in order to get real world experience and feedback.  Because of the early release some thought the car was a 1968 model but rest assured it is a 1969.  In addition to the new open chamber heads, these rare lightweight L88s also included the new  ZL-2 cold air induction hood, heavy duty clutch, smaller flywheel and a heavy duty cross-flow aluminum radiator. Though the radio and heater delete option RPO C-48 was eliminated in 1968 the lightweight L88’s had those items deleted and also included the deletion of all sound insulation and rear cargo area carpet.   The lightweight L88s also included an oil cooler, headers, and headlight kit in the trunk for the owner to install at their discretion.


Costanzo and co-driver Dave Heinz had an impressive race history in the SCCA and in the newly formed IMSA (International Motorsports Association) race series.   Costanzo repainted the #57 Corvette in 1971 in a striking but controversial rebel flag motif, a takeoff on competitor Don Greenwood’s cars painted in an American flag design.  The “Rebel,” as it became known, raced against other legendary Corvettes like “the winningest Corvette in history”, the Owens-Corning #12 Corvette, which was sold at Barrett-Jackson in Scottsdale in 2013 for a $1M.  But the Rebel’s archrival was Don Greenwood’s #48 and #50 L88 Corvettes both painted in the Stars and Stripes livery.


In mid 1971 Costanzo sold his car to his team manager, Toye English and his son Dana, who formed RED (Racing Engineering and Development) racing team with Dave Heinz as his lead driver and Don Yenko as his co-driver.  English decided to keep the Confederate flag paint scheme on the car because he thought it drew attention to the rivalry he had with Greenwood in his Stars and Stripes painted L88’s.  The competition went beyond the racetrack as RED’s L88 was the official test L88 for Goodyear® Tires and Greenwood’s L88’s were the official test cars for BFGoodrich® tires.
These cars were the contenders for the famous "tire wars" which took place in the 70's.  In addition the L88 was a southern sponsored car based in Florida and Greenwood’s L88 hailed from Michigan.  Both teams had a large loyal fan base and the livery of the cars only helped stoke the fires.

In RED racing’s debut at Watkins Glen in July the Confederate flag #57 Corvette driven by Heinz and Yenko finished second to the Greenwood’s #49 American Flag motif Corvette co driven by Bob Johnson.  But the “Rebel” team went on to win four of five IMSA events in 1971 and captured the first IMSA Championship.  During IMSA’s finale race at Daytona, Bob Johnson and Don Yenko drove the #57 Corvette to the race win and GTO Championship.  In the process Yenko broke the class speed record on a tri oval at 201.4. 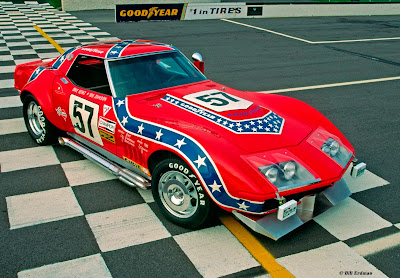 The following year at the 1972 12 Hours of Sebring, the Rebel qualified as the 13th fastest and second fastest in GT.  Dave Heinz passed the pole position Corvette (the ex Owens-Corning #12) on the first lap and led the GT class for the entire 12 hours, finishing 4th overall and 1st in GT. It was a record that stood until Pratt & Miller’s 2003 results.


By the mid 1980’s the car fell into obscurity.  It was found in 1991 by legendary Corvette historian and restoration specialist Kevin Mackay, owner of Corvette Repair in Valley Stream, Long Island.  After tracking the ownership history of the legendary race car he located it in a junk yard and purchased it for $7000.  Amazingly the car had all the original body panels, steering wheel, gauges, shifter, and seats. In 1993 he resurrected the L88 restoring it to the way the car appeared during as the Rebel in the early 1970s.  Mackay is famous for tracking down, researching and restoring historic Corvettes.  He spent several years trying to find the long lost Lemans winning C1 for Chip Miller of Corvettes at Carlisle.  Eventually Mackay’s persistence paid off, he tracked the car down, acquired it and restored it for Miller.  The saga became the subject of Michael Brown’s outstanding, award winning documentary “The Quest”.  (http://questdocumentary.com/)


Corvettes with a documented race history have become the hottest category of collector cars.  In September a 1967 L88 Corvette with a documented drag racing history set a record for the price of a Corvette sold at auction, selling for $3.2M.  Second generation Corvette Z06s are selling for $500K to over $1M and even authentic L88s without a race history are selling above $500K.  Barrett-Jackson is offering another historically significant L88 as a part of their Salon Collection and will be sold the same day in Barrett-Jackson’s brand new Scottsdale auction facility.  If you’re a Corvette enthusiast or collector Barrett-Jackson is the place to be on Saturday, January 18. (http://www.barrett-jackson.com/)

Posted by theRevenant at 7:40 PM