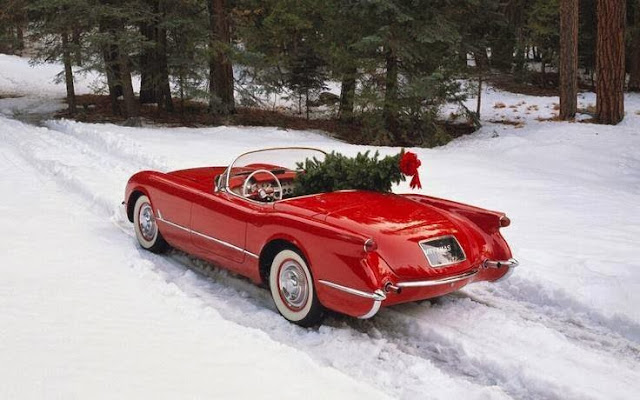 Twas the night before Christmas, the garage was prepared
For the one gift I asked for, nothing else could compare.
The tools put away and a space had been cleared
For the Stingray I hoped Santa’d bring me this year.

My other six Vettes had been stored for a reason
All cleaned, waxed, protected, for the whole winter season.
Out of the weather and put safely away
Dreamin’ of sunshine and warm summer days.

When out in the driveway there arose a commotion
I sprang from my bed in a fit of emotion.
Worried about thieves, the garage was unlocked
I searched for my colt making sure it was cocked.

I turned all the inside and outside lights on
To catch the intruder before he was gone.
What I saw in the spotlight was a sight to behold
A customized sleigh painted Riverside gold.

With sidepipes and tailfins it was quite a sensation
Led by tiny Corvettes one from each generation.
Duntov was driving, Harley Earl rode shotgun
Shouting commands to Corvette’s favorite sons.

He called out directions to seven small Vettes
That darted in front of him, faster than jets.
Driving the Vettes were engineers and designers
Who built America’s sports car there were none any finer.

McLellan, Juechter, Palmer, Hill was there too
Shinoda, Peters and Mitchell completed the crew.
Performance and styling, both praised and extolled
Each gave the Corvette a part of his soul.

They guided Zora’s sleigh this Christmas eve night
At incredible speeds, an astonishing sight.
Engineers and designers driving one of the seven
Generations that pulled Harley’s sleigh through the heavens.

The quiet was shattered by the dual mode exhaust
And with navigation they could hardly get lost.
The large sleigh was packed with all things Corvette
From new logo shirts to embroidered mat sets.

Everything possible with crossed Corvette flags
Mugs, wallets, hats and even handbags.
The logo was etched on mugs for the bar.
There were books on the history of America’s sports car

The night almost over, his sack still not depleted
His biggest delivery must still be completed.
Zora parked the contraption by my garage door
I thought I’d pass out right there on the floor.

Harley Earl then stood up, shouted another command
To his esteemed helpers just like it was planned.
They got out of their Vettes then walked to the back
And lifted a huge box out of Harley’s large sack.

I watched as they carried it to the garage
Lifted the door Zora called out to Tadge.
“Look at each one of the six generations
Each in its time caused quite a sensation.

And now your C7 will join all the rest
And like each of the others will become simply the best.
Each generation has raised the bar
Keeping the Vette the number one car.

So place the C7 in the space that’s been cleared
Among the six others, they’re all so revered.
A Stingray in white, a red leather interior
The consummate Corvette, none more superior.

Now close the door and let’s get it in gear.
We’ve gifts to deliver so let’s disappear.”
Each of the helpers ran back to their cars
Started their engines and took off for the stars.

Guiding Harley and Zora in their prototype sleigh
Seven generations of Vettes leading the way.
I heard Harley exclaim when their task was all done
If you like the C7 you’ll love ZR1.


Have a great Holiday!

Posted by theRevenant at 9:51 AM No comments: